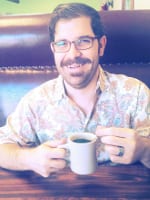 Ryan has been the Communications Director at a large Pentecostal church just south of Dallas for the past five years. He received his M.Div. from Princeton Theological Seminary where he studied church communication and new media. Ryan met Julia, his wife, at Princeton where they fell in love spending late nights, he with coffee and she with tea, discussing the many differences between Pentecostal and Episcopalian theology. They have a six-year-old daughter and a dog.