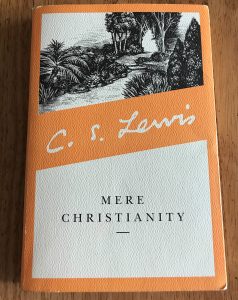 For the last few weeks, as the rate of confirmed COVID-19 cases in Maryland increased, so has my anxiety about the pandemic.  The tactic I chose to counter this was to seek out more information from authoritative sources (like the CDC), the news, and (knowing that I shouldn’t) social media.  The balm from those sources were short-lived, with many of them not offering any relief whatsoever – only more fear.  Eventually, I stopped this altogether and turned to reading Mere Christianity, which I had first read back in 2012.  My reason for doing this was because of the book’s origins:  the content that became Mere Christianity was first delivered by C.S. Lewis as a series of “talks” on BBC Radio during “the Blitz,” the Nazi’s bombing campaign against the United Kingdom.  I figured that if Lewis’ words about Christianity were a comfort to British subjects during the Blitz, then they might be a comfort to me now during this pandemic.

A couple of nights ago, when I was reading this Lewis classic, I stumbled upon a phrase that startled and convicted me:

“In religion, as in war and everything else, comfort is the one thing you cannot get by looking for it.”

The next day, haunted by that sentence, I circled back to it often in an effort to make sense of what Lewis was saying.  As I continued to read, I found the answer about 20 or so pages later (emphasis mine):

“God made us:  invented us as a man invents an engine.  A car is made to run on petrol, and it would not run properly on anything else.  Now God designed the human machine to run on Himself.  He Himself is the fuel our spirits were designed to burn, or the food our spirits were designed to feed on.  There is no other.  That is why it is no good asking God to make us happy in our own way without bothering about religion.  God cannot give us a happiness and peace apart from Himself, because it is not there.  There is no such thing.”

After reading that, I had answers to both what Lewis was aiming at with that vague sentence, as well as why this particular Easter season has felt so different for me:  I have been seeking comfort – not Christ – during this time.  Everything that I had been doing from a standpoint of faith (to include my decision to read Mere Christianity), was in actuality me using God as a vehicle to attain some internally-derived comfort from my worries.  Moreover, as my fear increased, I managed to forget The Great Enduring Truth that I know as I sought out the fleeting (and flawed) information of the here-and-now.  Or as my favorite band, The Avett Brothers, said in their song “February Seven” (and at risk of having one too many quotes in a single blog post):

I went on the search for something real.
Traded what I know for how I feel.
But the ceiling and the walls collapsed
Upon the darkness I was trapped
And as the last of breath was drawn from me
The light broke in and brought me to my feet.

Pandemics, viruses, etc. are hard for us (or maybe just me) to grasp.  In reality, the Wondrous Love of Jesus Christ is truly hard for us (not just me, I am certain) to fathom.  But despite all of the things that I find myself struggling to understand, here is what this distracted Lenten season has taught me (with thanks to C.S. Lewis):  comfort is temporary; however, peace – True Peace – comes from rising to your feet, placing your hand into the scarred hands of Jesus, and walking with Him through this troubled world toward the Glory that He achieved for us all through His willing sacrifice on the cross.

Check out the books and music at the Soul Cafe that can help you dig deeper into our current and recent worship series.