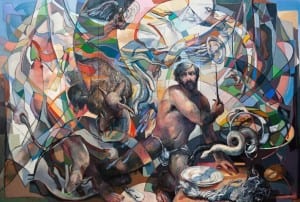 Yesterday I preached about Peter’s unsettling and transforming vision at Joppa (Acts 10:9-48). This was a turning point for Peter (and the early Christian community) as he came to understand that the life-giving way of Jesus was not just for Jews only, but was also good news intended to include Gentiles, too. This required a radical conversion of heart for Peter and it took a dramatic vision of “unclean animals” (i.e., not kosher) being dropped in his lap not once, but three times, for him to open himself up to this startling possibility. It also meant that he had to let go of some important things — his understanding of his tradition and the Hebrew scriptures — in order to embrace this new reality. The voice that accompanied the vision spoke to him and said, “What God has made clean, you must not call profane” (Acts 10:15).

I suggested that the ministry of Jesus was all about challenging preconceptions and prejudices (about faith, about God, about the Kingdom), making outsiders insiders, and offering new ways to see ourselves and the world around us. Moreover, I said that I believe that the Spirit of God continues to speak to us today — long after the canon of the Bible was “closed” (around the 4th century AD) and we came to have the sacred books of the Bible as we know them. Sometimes listening for the voice of God has forced us to reconsider some things that we thought the Bible said like slavery is OK or that women shouldn’t be ordained. I wondered aloud if God might still be be nudging us in our time to see things in new ways — beyond or in spite of what we may have read in some limited verses of Scripture — specifically as it relates to how we welcome and see gays and lesbians as holy children of God (“clean and not profane”). I know it is scary for some people to think that there are parts of the Bible that are open to fresh interpretation or perhaps even contradiction. But what is even scarier for me is to think that God would be silent for the last 1700 years or that God was done speaking and opening us up to the ever widening reach of grace. What do you think?

p.s. I talked at the end of my sermon about one of the people who had been helping me listen to God in new and fresh ways while I was on vacation this past week. Bryan Stephenson is the founder of the Equal Justice Initiative and has spent the last 30+ years defending people on death row, advocating for juveniles who have been tried as adults, and trying to bring a measure of equity to our justice system which tends to disproportionately favor the privileged and punish the poor. I highly commend his/my beach-reading book, Just Mercy, or that you check out this interview from Fresh Air about his work or his TED talk from 2012.

Check out the books and music at the Soul Cafe that can help you dig deeper into our current and recent worship series.