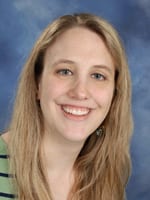 Erica Benjamin spent the majority of her childhood in Northeast Pennsylvania.  The daughter of a United Methodist pastor she lived in several places but considers NEPA home.  Her parents now live in upstate New York.

She moved to Washington, DC in 2001 to attend American University where she earned a bachelor’s degree in Elementary Education.  During college she spent a semester studying abroad in Prague, Czech Republic.  After graduation she taught for 2 years at Gibbs Elementary School in DC.  She then enrolled at Wesley Theological Seminary in DC.  While in Seminary she completed her internship at Central Union Mission, a homeless shelter and transitional housing program for men where she wrote literacy and Biblically based curriculum for the men in the Spiritual Transformation Program.  She graduated from Seminary in May 2010 with a Masters of Divinity specializing in Urban Ministry.

Erica was married to Chris Bloom in 2010.  They have two sons, Jonathan & Timothy.  They enjoy cooking and playing outdoors.